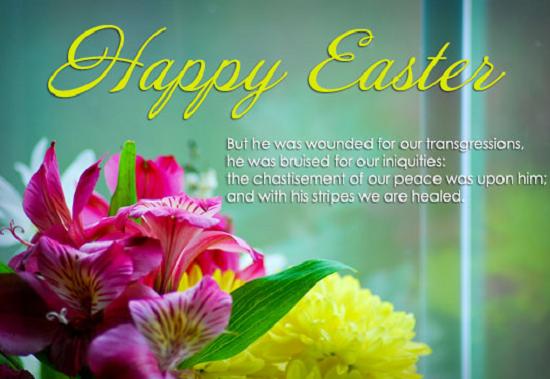 Now, if you’re looking for Easter bible quotes and Easter quotes to write on your Easter greetings card and send as happy easter wishes, you’ve picked the right website. Here, we will provide you a collection of short Easter bible verses and religious Easter quotes.

Jesus said to her, “I am the resurrection and the life. The one who believes in me will live, even though they die ~ John 11:25 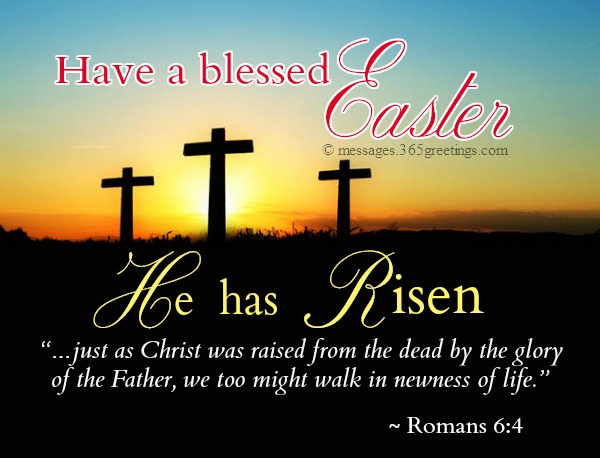 “…just as Christ was raised from the dead by the glory of the Father, we too might walk in newness of life.” ~ Romans 6:4 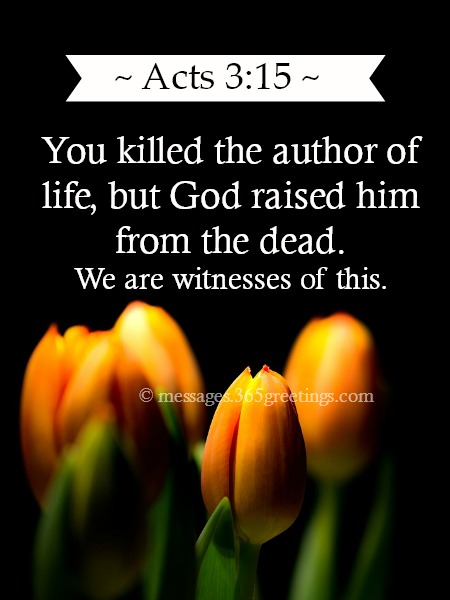 You killed the author of life, but God raised him from the dead. We are witnesses of this. ~ Acts 3:15 15 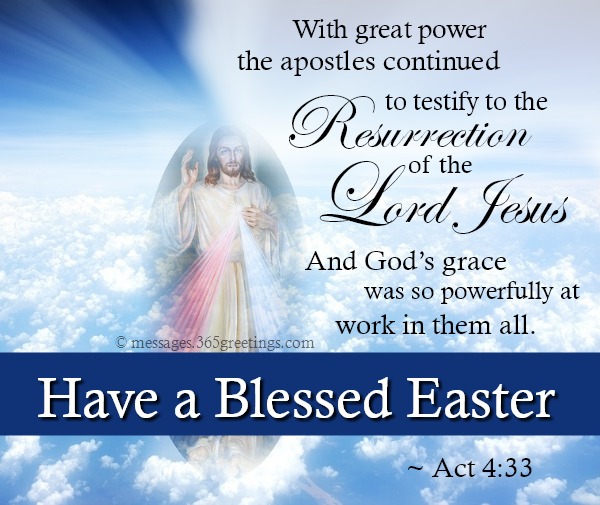 With great power the apostles continued to testify to the resurrection of the Lord Jesus. And God’s grace was so powerfully at work in them all. ~ Act 4:33 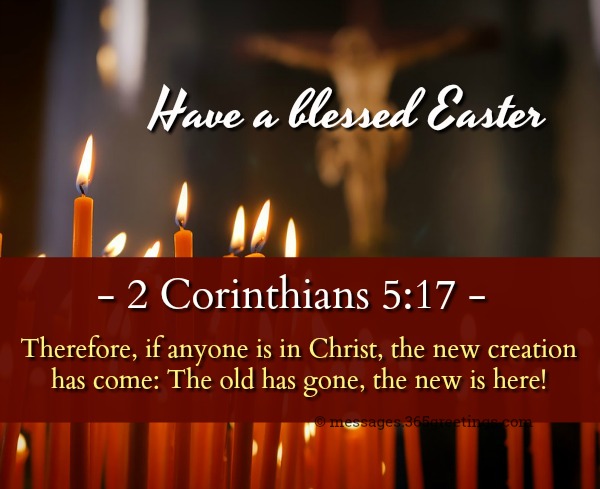 Therefore, if anyone is in Christ, the new creation has come: The old has gone, the new is here! ~ 2 Corinthians 5:17

If you declare with your mouth, “Jesus is Lord,” and believe in your heart that God raised him from the dead, you will be saved. ~ Romans 10:9

For what I received I passed on to you as of first importance: that Christ died for our sins, that he was buried, that he was raised on the third day. ~ 1 Corinthians 15:3-4

But Christ has indeed been raised from the dead, the firstfruits of those who have fallen asleep. ~ 1 Corinthians 15:20 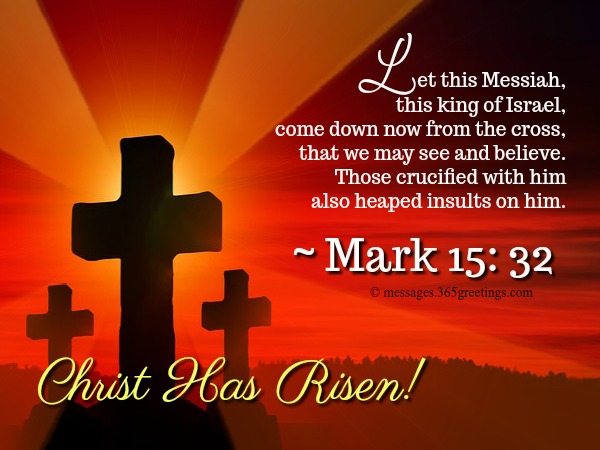 Let this Messiah, this king of Israel, come down now from the cross, that we may see and believe.” Those crucified with him also heaped insults on him. ~ Mark 15: 32

And this is the promise which He Himself made to us: eternal life. ~ 1 John 2:25

“Behold, we are going up to Jerusalem; and the Son of Man will be delivered to the chief priests and scribes, and they will condemn Him to death, and will deliver Him to the Gentiles to mock and scourge and crucify Him, and on the third day He will be raised up.” ~ Matthew 20:18-19

“And as for the fact that He raised Him up from the dead, no more to return to decay, He has spoken in this way: ‘I will give you the holy and sure blessings of David.’ “Therefore He also says in another [Psalm], ‘Thou wilt not allow Thy Holy One to undergo decay.’ ~ Acts 13:34-35

I want to know Christ and the power of his resurrection and the fellowship of sharing in his sufferings, becoming like him in his death, and so, somehow, to attain to the resurrection from the dead. Not that I have already obtained all this, or have already been made perfect, but I press on to take hold of that for which Christ Jesus took hold of me. ~ Philippians 3:10-12

In this section, compiled are the bible verses that tell the story about Easter. These easter bible verses are not in particular order. We hope that you find which one that will inspire you the most.

After the Sabbath, at dawn on the first day of the week, Mary Magdalene and the other Mary went to look at the tomb. There was a violent earthquake, for an angel of the Lord came down from heaven and, going to the tomb, rolled back the stone and sat on it. His appearance was like lightning, and his clothes were white as snow. The guards were so afraid of him that they shook and became like dead men.

The angel said to the women, “Do not be afraid, for I know that you are looking for Jesus, who was crucified. He is not here; he has risen, just as he said. Come and see the place where he lay. Then go quickly and tell his disciples: ‘He has risen from the dead and is going ahead of you into Galilee. There you will see him.’ Now I have told you.”

So the women hurried away from the tomb, afraid yet filled with joy, and ran to tell his disciples. Suddenly Jesus met them. “Greetings,” he said. They came to him, clasped his feet and worshiped him. Then Jesus said to them, “Do not be afraid. Go and tell my brothers to go to Galilee; there they will see me.” ~ Matthew 28:1-10 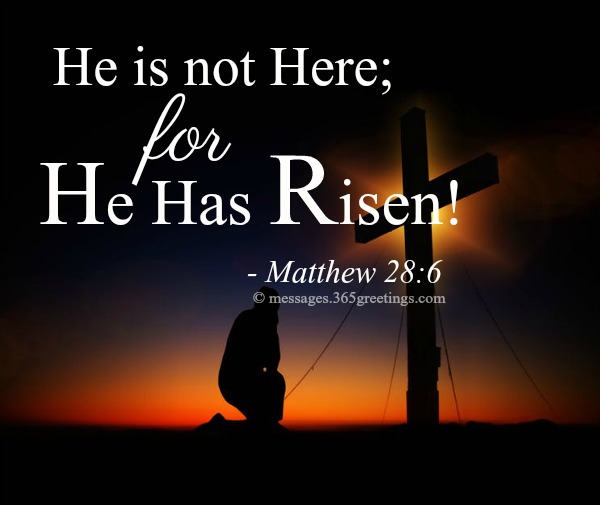 But on the first day of the week, at early dawn, they came to the tomb, bringing the spices which they had prepared. And they found the stone rolled away from the tomb, but when they entered, they did not find the body of the Lord Jesus. And it happened that while they were perplexed about this, behold, two men suddenly stood near them in dazzling apparel; and as the women were terrified and bowed their faces to the ground, the men said to them, “Why do you seek the living One among the dead? “He is not here, but He has risen. Remember how He spoke to you while He was still in Galilee, saying that the Son of Man must be delivered into the hands of sinful men, and be crucified, and the third day rise again.” And they remembered His words, and returned from the tomb and reported all these things to the eleven and to all the rest. Now they were Mary Magdalene and Joanna and Mary the mother of James; also the other women with them were telling these things to the apostles. And these words appeared to them as nonsense, and they would not believe them. But Peter arose and ran to the tomb; stooping and looking in, he saw the linen wrappings only; and he went away to his home, marveling at that which had happened. ~ Luke 24:1-12

He then began to teach them that the Son of Man must suffer many things and be rejected by the elders, the chief priests and the teachers of the law, and that he must be killed and after three days rise again. ~ Mark 8:31

So Joseph bought some linen cloth, took down the body, wrapped it in the linen, and placed it in a tomb cut out of rock. Then he rolled a stone against the entrance of the tomb. 47Mary Magdalene and Mary the mother of Joseph saw where he was laid. ~ Mark 15:46-47

As they entered the tomb, they saw a young man dressed in a white robe sitting on the right side, and they were alarmed.“Don’t be alarmed,” he said. “You are looking for Jesus the Nazarene, who was crucified. He has risen! He is not here. See the place where they laid him. But go, tell his disciples and Peter, ‘He is going ahead of you into Galilee. There you will see him, just as he told you.’ ~ Mark 16:5-7