Dame Elizabeth Rosemond Taylor aka Elizabeth Taylor was born on February 27, 1932. The American-British actress is a child star under MGM, and grow up to be one of the great actresses of Hollywood.   Liz Taylor is a world famous film actress, recognized for her glamorous lifestyle, acting ability, violet eyes and beauty.

Elizabeth Taylor first successful movie was National Velvet, shown in 1944. She also starred in a movie called Father of the Bride, A Place in the Sun, Giant, Cat on a Hot Tin Roof and Suddenly, Last Summer. Taylor won as best actress in the Academy Award, in 1960 for the movie Butterfield. She became even more popular when she played the title role in the movie Cleopatra, with co-star and husband Richard Burton. In 1966, Taylor won another best actress award for Who’s Afraid of Virginia Woolf.

Her glamorous lifestyle and well-publicized life including several illnesses and eight marriages (twice married to actor Richard Burton) have made her an icon in Hollywood. Aside from her extra ordinary beauty, she is well loved because of her humanitarian works. Taylor championed Aids and HIV programs, wherein her devotion led to the co-founding of Elizabeth Taylor Aids Foundation and the American Foundation For Aids Research.

Her other achievements in life include being named as the 7th Greatest American Screen Legends, an honour given by the American Film Institute. She was also given a Presidential Citizens Medal, the Jean Hersholt Humanitarian Award, the Legion of Honour and the Life Achievement Award.

The Hollywood legend and once voted as the most “Beautiful Woman in the World died at the age of 79 from congestive heart failure in March 2011. If you are a fan and wondering about the woman many men loved and adored, then you are in the right page.

You can learn a lot about Elizabeth Taylor by her famous quotes about life, HIV, and love. So, scroll down and get to know Liz Taylor, up close and personal. 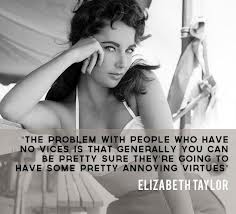 “I’ve only slept with men I’ve been married to. How many women can make that claim?”

“Everything makes me nervous, except making films”

“I really don’t remember much about Cleopatra. There were a lot of other things going on.”

“I am a very committed wife. And I should be committed too – for being married so many times.”

“I fell off my pink cloud with a thud.” 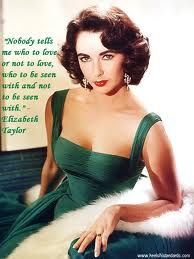 “I adore wearing gems, but not because they are mine. You can’t possess radiance, you can only admire it.”

“When people say: she’s got everything, I’ve only one answer: I haven’t had tomorrow.”

“I believe in mind over matter and doing anything you set your mind on.”

“I don`t pretend to be an ordinary housewife.”

“I had a hollow leg. I could drink everyone under the table and not get drunk. My capacity was terrifying.”

“I, along with the critics, have never taken myself very seriously.”

“I have a woman’s body and a child’s emotions.”

“The problem with people who have no vices is that generally you can be pretty sure they’re going to have some pretty annoying virtues.”

“It is strange that the years teach us patience; that the shorter our time, the greater our capacity for waiting.”

“I’m a survivor – a living example of what people can go through and survive.”

“I feel very adventurous. There are so many doors to be opened, and I’m not afraid to look behind them.”

“Some of my best leading men have been dogs and horses.”

“You find out who your real friends are when you’re involved in a scandal.”

“I think I’m finally growing up – and about time.”

“I don’t think President Bush is doing anything at all about Aids. In fact, I’m not sure he even knows how to spell Aids.”

“I suppose when they reach a certain age some men are afraid to grow up. It seems the older the men get, the younger their new wives get.”

“My mother says I didn’t open my eyes for eight days after I was born, but when I did, the first thing I saw was an engagement ring. I was hooked.”

“So much to do, so little done, such things to be.”

“I’ve always admitted that I’m ruled by my passions.”

“People who know me well, call me Elizabeth. I dislike Liz.”

“Marriage is a great institution.”

“I haven’t read any of the autobiographies about me.”

“Success is a great deodorant It takes away all your past smells.”

“I sweat real sweat and I shake real shakes.”

“It’s not the having, it’s the getting.”

“It is bad enough that people are dying of AIDS, but no one should die of ignorance.”

“When you’re fat, the world is divided into two groups – people who bug you and people who leave you alone. The funny thing is, supporters and saboteurs exist in either camp.”

“I never face the day without perfume.”

“Pour yourself a drink, put on some lipstick, and pull yourself together.”

“When the sun comes up, I have morals again.”

“Everything was handed to me – looks, fame, wealth, honour, love. I rarely had to fight for anything”

“What do you expect me to do?  Sleep alone?”

“I know I’m vulgar, but would you have me any other way?”

“My heart…my mind… are broken. I loved Michael with all my soul and I can’t imagine life without him. We had so much in common and we had such loving fun together.”– Quotes on Michael Jackson death