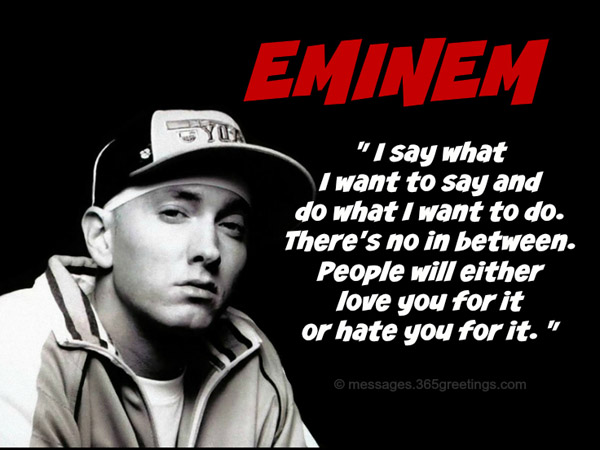 Eminem is the stage name of the American rapper, Marshall Bruce Mathers III. His artistry also extends to songwriting, producing, and acting. He has been acknowledged as one of the world’s biggest artists with Rolling Stone ranking him at 82 under its 100 Greatest Artists of All Time.

He grew up in a single parent home and managed to live on bare necessities. He relates so well to the hard life in the ‘hood which has been stereotyped unfairly with African Americans. Being Caucasian, it was actually a challenge at the beginning to be taken seriously in his chosen music genre. Just as it was hard for most people to believe that he was a poor white man, it was hard for them to appreciate initially that rap can come from someone who isn’t black.

To change the tone and styles of his rap songs, he uses alter egos like “Slim Shady” who was introduced in ‘The Slim Shady EP.” Eminem is able to make dark songs with a hint of humor through Slim Shady. Another alter ego is Ken Kaniff who assumes a homosexual persona and makes fun of his songs. He also uses his addiction as a subject for his music. He affirms that he is sober now and that his music is enough to get him high.

He may be unpopular with parents and child advocates because of his rampant use of expletives in his music, but that is what makes him famous. He speaks his mind in his songs and he does not consider censorship as his problem. 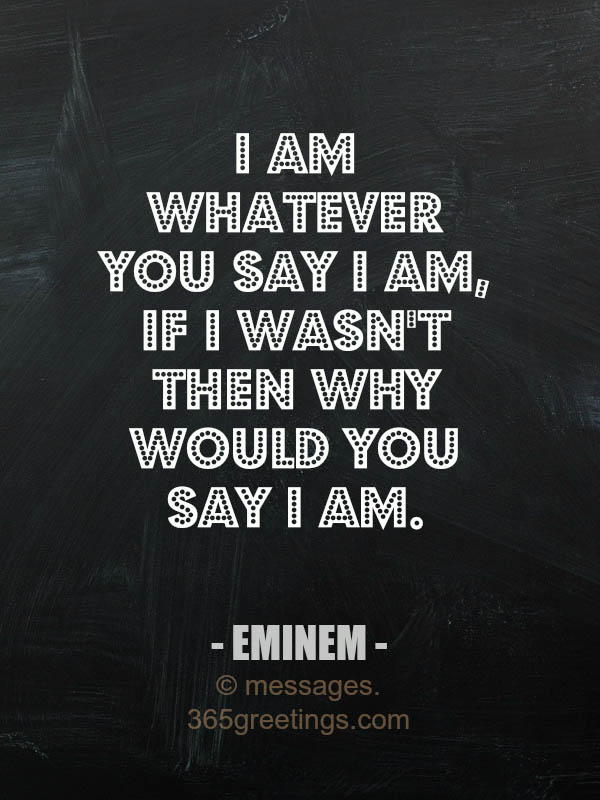 “I am who I am and I say what I think.
I’m not putting a face on for the record.”

“It’s be stupid for me to sit here and say that there aren’t kids who look up to me, but my responsibility is not to them. I’m not a baby sitter.”

“A bunch of girls, swinging from a nice chandelier,
Landing on top of me naked..
While I lay in a pool of steaming hot water!”

His songs tell a story that sounds quite harsh but actually reflects more of reality. This is what his music fans are clamoring for, an artist who keeps it real and does not beat around the bush to present his ideas. 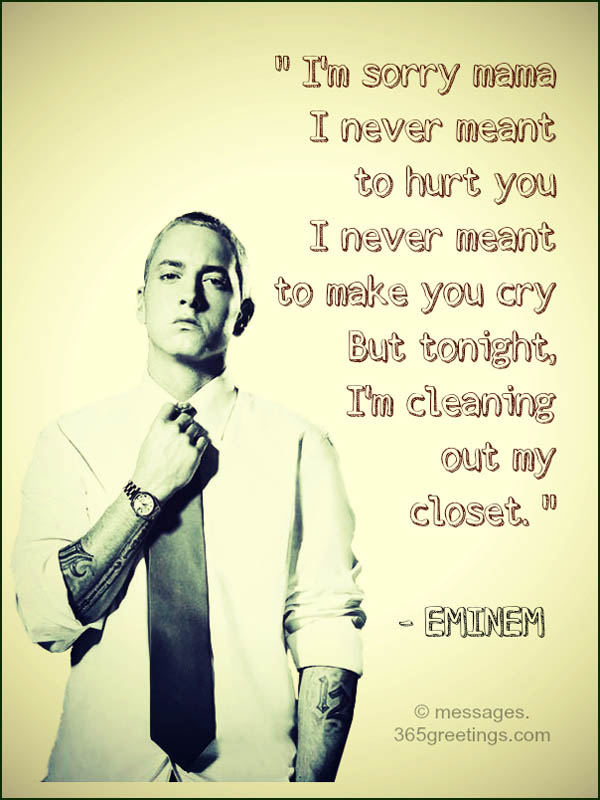 “Have you ever been hated, or discriminated against
I have, I’ve been protested and demonstrated against.”

“Of course they gonna now what intercourse is
By the time they hit fourth grade
They got the Discovery Channel don’t they?”

“You gonna take advice from somebody who slapped DEE BARNES??!”

“The only difference is I got the balls to say it in front of yall and I don’t have to be false or sugar-coated at all.”

“Cause see they call me a menace; and if the shoe fits I’ll wear it.”

His quotes come from a life that was never sheltered, but the confidence he exudes can only come from his relationship with his mother which does not receive much of the spotlight. Though his father left them, his mother stayed on and that could have given him the foundation for a stronger personality. 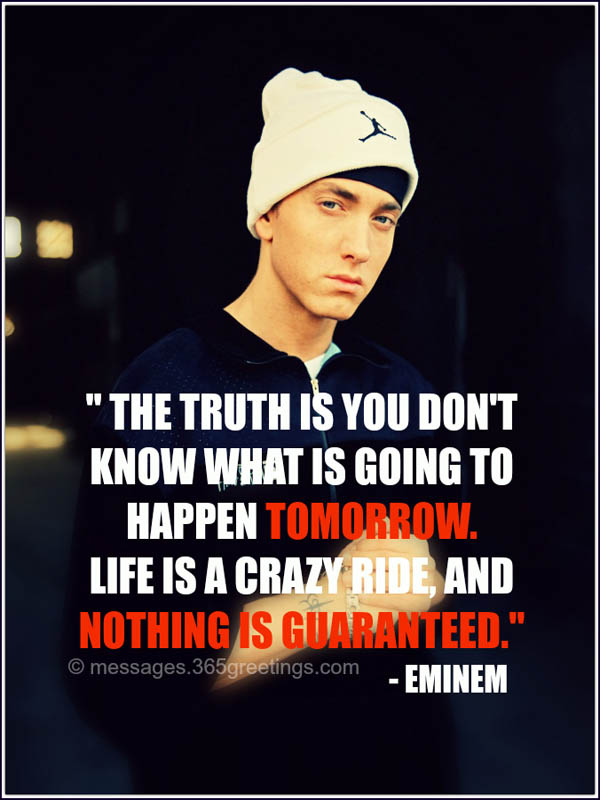 “The truth is you don’t know what is going to happen tomorrow.
Life is a crazy ride, and nothing is guaranteed.”

“Sometimes you just gotta let sh-t go and say ‘to hell with it’ and move on.

“When you’re a little kid, you don’t see color,
and the fact that my friends were black never crossed my mind.
It never became an issue until I was a teenager and started trying to rap.”

“It sometimes feels like a strange movie, you know,
it’s all so weird that sometimes I wonder if it is really happening.”

“Yeah, I did see where the people dissing me were coming from.
But, it’s like, anything that happened in the past between black and white,
I can’t really speak on it, because I wasn’t there.
I don’t feel like me being born the color I am makes me any less of a person.”

“If there’s not drama and negativity in my life,
all my songs will be really wach and boring or something.”

“These times are so hard,
and they’re getting even harder.”

“Why is it so hard for people to believe that white people are poor?!
I wouldn’t say I lived in a ghetto, I’d say I lived in the ‘hood.
The same friends I had back then are the same people on tour with me now.”

Though it is easy to peek into his relationships, we cannot judge and say that this is what love is for Eminem. This is a man who raised his daughter well and even adopted 2 other children. Only a person full of love can enlarge his family in this manner. 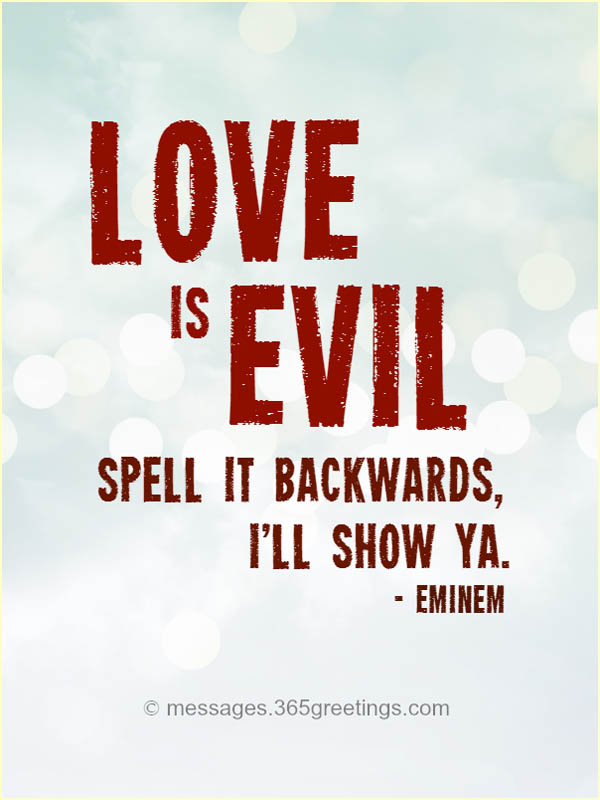 “Love is evil, spell it backwards, I’ll show ya.”

“No love lost, no love found.”

“Love is just a word, but you bring it definition.”

“I don’t hate women – they just sometimes make me mad.”

With all that he has gone through, he is definitely considered no less than one of the more successful artists in the turn of the millennium. He continues to inspire aspiring artists who have yet to find their voice in the industry.

“Dealing with backstabbers, there was one thing I learned.
They’re only powerful when you got your back turned.”

“I do say things that I think will shock people.
But I don’t do things to shock people.
I’m not trying to be the next Tupac,
but I don’t know how long I’m going to be on this planet.
So while I’m here, I might as well make the most of it.”

“I want to solidify as an artist and show that as I grow as a person and make mistakes and learn from them, I’m going to grow artistically.”

“I had nothing to lose, but something to gain.
If I made an album for me and it was to my satisfaction, then I succeeded.
If I didn’t then my producers were going to give up on the whole rap thing we were doing.
I made some shit that I wanted to hear.
The Slim Shady EP, I lashed out on everybody who talked shit about me.”

“Somewhere deep down there’s a decent man in me, he just can’t be found.”

“Say there’s a white kid who lives in a nice home, goes to an all-white school, and is pretty much having everything handed to him on a platter – for him to pick up a rap tape is incredible to me, because what that’s saying is that he’s living a fantasy life of rebellion.”