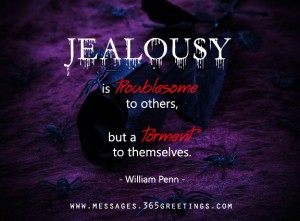 Jealousy, also known as envy, is considered as curse. Most of you have probably felt this emotion at least once in your life. Regardless of your age, social status, gender or occupation, you must have felt jealousy at least once. Don’t get jealous, I’ve heard these words many times. But trust me, it’s easier said than done. Sometimes, the feeling of enviousness or jealousness cannot be avoided.

While Jealousy is really hard to prevent, limiting it is the least we can do. Here are some of the best and famous jealousy quotes I’d like to share to you to at least express why you should avoid this vice. Most of the quotes about Jealousy I’ve included here are for relationships. I also listed some of the jeakousy quotes from famous people and celebrity.

Never waste jealousy on a real man:
It is the imaginary man that supplants us all in the long run.
~ George Bernard Shaw

It is never wise to seek or wish for another’s misfortune.
If malice or envy were tangible and had a shape,
It would be the shape of a boomerang.
– Charley Reese 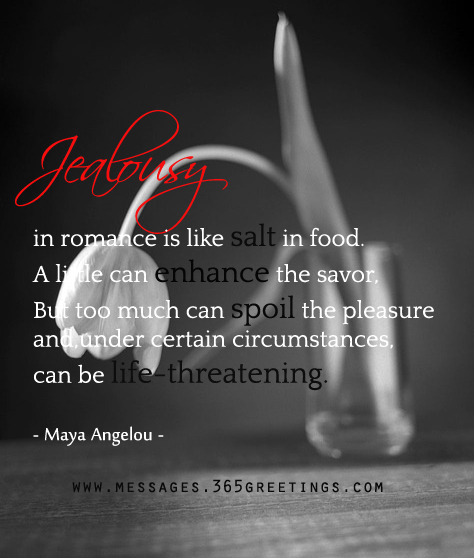 The envious die not once,
but as oft as the envied win applause.
– Baltasar Gracián

The jealous are troublesome to others,
but a torment to themselves.
– William Penn

Envy is the art of counting the other fellow’s blessings instead of your own.
– Harold Coffin

Jealousy is no more than feeling alone against smiling enemies.
– Elizabeth Bowen

Envy is thin because it bites but never eats.
– Spanish Proverb

Calamities are of two kinds:
Misfortune to ourselves,
And good fortune to others.
– Ambrose Bierce

Jealousy is an awkward homage which inferiority renders to merit.
– Mme. de Puixieux

Jealousy is the dragon in paradise;
The hell of heaven;
And the most bitter of the emotions
Because associated with the sweetest.
– A.R. Orage

Envy is the most stupid of vices,
for there is no single advantage to be gained from it.
– Honore de Balzac

Jealousy injures us with the dagger of self-doubt.
– Terri Guillemets

Our envy always lasts longer
Than the happiness of those we envy.
– François de La Rochefoucauld

Jealousy is both reasonable and belongs to reasonable men,
While envy is base and belongs to the base,
For the one makes himself get good things by jealousy,
While the other does not allow his neighbour to have them through envy.
– Aristotle 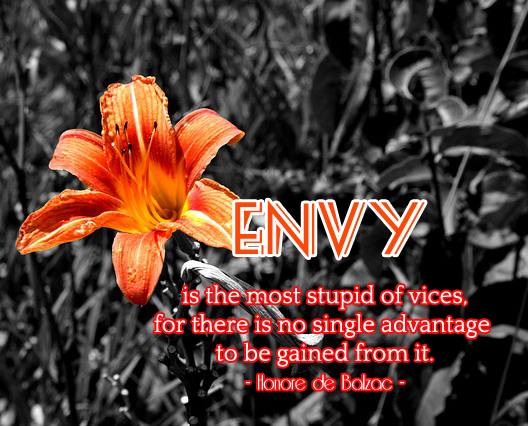 Every girl is jealous of someone.
So next time you’re looking at someone thinking,
“I wish I was that pretty,”
remember someone is thinking that about you.
– Anonymous

People are taken aback by a confident,
pretty girl who knows what she wants in life
and isn’t going to let anyone get in her way.
And you know what it’s all about? Jealousy.
– Summer Altice

Jealousy is simply and clearly the fear that you do not have value.
Jealousy scans for evidence to prove the point –
That others will be preferred and rewarded more than you.
There is only one alternative – self-value.
If you cannot love yourself, you will not believe that you are loved.
You will always think it’s a mistake or luck.
Take your eyes off others and turn the scanner within.
Find the seeds of your jealousy, clear the old voices and experiences.
Put all the energy into building your personal and emotional security.
Then you will be the one others envy,
And you can remember the pain and reach out to them.
– Jennifer James

Never get jelous when you see your ex with someone else,
Because our parents taught us to give our used toys to less fortunate.
– Unknown
Sometimes, it takes a little bit of Jealousy
For you to figure out how much someone really means to you.
– Unknown

A jealous girlfriend is a faithful girlfriend.
If she doesn’t get jealous when someone has your attention,
It’s because someone has hers.
– Unknown

My wife’s jealousy is getting ridiculous.
The other day she looked at my calendar and wanted to know who May was.
– Rodney Dangerfield

I’ve never been jealous.
Not even when my dad finished the fifth grade a year before I did.
– Jeff Foxworthy

A Jealous woman does better research than an FBI.
– Unknown

A competent and self-confident person is incapable of jealousy in anything.
Jealousy is invariably a symptom of neurotic insecurity.
– Robert A. Heinlein

Jealousy is indeed a poor medium to secure love,
But it is a secure medium to destroy one’s self-respect.
For jealous people, like dope-fiends, stoop to the lowest level
And in the end inspire only disgust and loathing.
– Emma Goldman

Love looks through a telescope;
Envy, through a microscope.
– Josh Billings

Jealousy in romance is like salt in food.
A little can enhance the savor,
But too much can spoil the pleasure and,
Under certain circumstances,
Can be life-threatening.
– Maya Angelou

He that is not jealous is not in love.
– St. Augustine

Anger and jealousy can no more bear to lose sight of their objects than love.
– George Eliot

Jealousy, that dragon which slays love
under the pretense of keeping it alive.
– Havelock Ellis

Envy is a littleness of soul,
which cannot see beyond a certain point,
and if it does not occupy the whole space feels itself excluded.
– William Hazlitt

Jealousy is said to be the offspring of Love.
Yet, unless the parent makes haste to strangle the child,
the child will not rest till it has poisoned the parent.
– A.W. Hare and J.C. Hare

I can’t really change my life to accommodate people who are jealous.
I don’t see why I should.
– Sting

So full of artless jealousy is guilt,
It spills itself in fearing to be spilt.
– Unknown

Jealousy lives upon doubts.
It becomes madness or ceases entirely
As soon as we pass from doubt to certainty.
– François de la Rochefoucauld

No true love there can be without Its dread penalty — jealousy.
– Lord Lytton

O! beware, my lord, of jealousy;
It is the green-eyed monster which doth mock
The meat it feeds on.
– Othello

Trifles light as air Are to the jealous confirmations
strong As proofs of holy writ.
– Othello

I do beseech you– Though I perchance am vicious in my guess (As I confess it is my nature’s plague To spy into abuses, and oft my jealousy Shapes faults that are not), that your wisdom yet From one that so imperfectly conjects Would take no notice, nor build yourself a trouble Out of his scattering and unsure observance.
– William Shakespeare (Othello)