Quotes from famous coaches, athletes, professional, and historical figures can bring you inspiration to succeed in whatever sports you are into, so enjoy, as one of the quotes below can be very useful to you.

“Champions aren’t made in the gyms. Champions are made from something they have deep inside them — a desire, a dream, a vision.”-Muhammad Ali, World Heavy Weight Champion Boxer

“Champions aren’t made in the gyms. Champions are made from something they have deep inside them — a desire, a dream, a vision.”-Muhammad Ali, Boxer

“In order to excel, you must be completely dedicated to your chosen sport. You must also be prepared to work hard and be willing to accept destructive criticism. Without 100 percent dedication, you won’t be able to do this.”- Willie Mays

“It isn’t the mountains ahead to climb that wear you out; it’s the pebble in your shoe.”-Muhammad Ali, World Heavyweight Champion Boxer

“Difficulties in life are intended to make us better, not bitter.”- Dan Reeves, Former NFL athlete and head coach 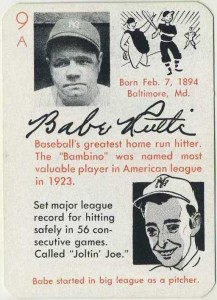 “Never let the fear of striking out get in your way.”-George Herman “Babe” Ruth, Baseball Legend

“Relax? How can anybody relax and play golf? You have to grip the club, don’t you?”- Ben Hogan, Golf Great

“The secret of winning football games is working more as a team, less as individuals. I play not my 11 best, but my best 11.” – Knute Rockne, Coach

“A team is where a boy can prove his courage on his own. A gang is where a coward goes to hide.” – Mickey Mantle, Famous Baseball Player

“The rewards are going to come, but my happiness is just loving the sport and having fun performing.” – Jackie Joyner Kersee, Track and Field Legend

“A life of frustration is inevitable for any coach whose main enjoyment is winning.”- Chuck Noll, Steelers Coach 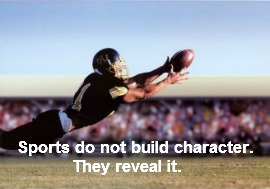 “As you walk down the fairway of life you must smell the roses, for you only get to play one round.”- Ben Hogan, Golf Great

“Do you know what my favorite part of the game is? The opportunity to play.”- Mike Singletary, 49ers Head Coach

“It’s a round ball and a round bat, and you got to hit it square.”- Pete Rose, Baseball Great

“Don’t tell me how rocky the sea is, just bring the ship in.”- Lou Holtz, College Football Hall of Famer

“God gets you to the plate, but once you’re there you’re on your own.” – Ted Williams, Baseball Great

” In baseball and in business, there are three types of people. Those who make it happen, those who watch it happen, and those who wonder what happened.”- Tommy Lasorda, MLB Pitcher, Manager

“I was told over and over again that I would never be successful, that I was not going to be competitive and the technique was simply not going to work. All I could do was shrug and say “We’ll just have to see.” -Dick Fosbury, Inventor of the current high jump technique and Olympic Gold Medalist

“If we could have just screwed another head on his shoulders, he would have been the greatest golfer who ever lived.”– Ben Hogan, Golf Great

“One man practicing sportsmanship is far better than a hundred teaching it.”- Knute Rockne, College Football Hall of Fame Coach
“I never criticize a player until they are first convinced of my unconditional confidence in their abilities.” – John Robinson, Football Player

“Confidence comes not from always being right but from not fearing to be wrong.- Peter T. McIntyre, Footballer

“You owe it to yourself to be the best you can possibly be – in baseball and in life.”- Pete Rose, Baseball Great

“The road to Easy Street goes through the sewer.”- John Madden, Football Coach

“Nothing will work unless you do.”- John Wooden, Basketball Coach

“Good, better, best. Never let it rest. Until your good is better and your better is best.”- Tim Duncan, NBA MVP

“Toughness is in the soul and spirit, not in muscles.”- Alex Karras, Football Player

“I always felt that my greatest asset was not my physical ability, it was my mental ability.” – Bruce Jenner, Track and Field Athlete

“I figure practice puts your brains in your muscles.”- Sam Snead, Golfer

“The ideal attitude is to be physically loose and mentally tight.”- Arthur Ashe

“My thoughts before a big race are usually pretty simple. I tell myself: Get out of the blocks, run your race, stay relaxed. If you run your race, you’ll win… channel your energy. Focus.” – Carl lewis

“True disputants are like true sportsmen: their whole delight is in the pursuit.” Alexander Pope, English Poet

“Experience is a hard teacher because she gives the test first, the lesson afterward.” -Vernon Law

“Adversity causes some men to break; others to break records.” – William A. Ward, Inspirational Writer

“Sweat is the cologne of accomplishment.”- Heywood Hale Broun, sportswriter 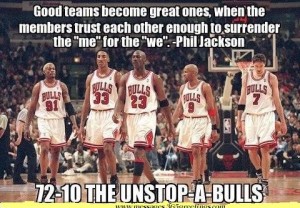 Basketball is one of the best sports, no doubt about it. One of the team in NBA that have set the standard for excellence is the Chicago Bulls after winning 72 games in the 1995-96 season. The historic team has the right mix of people, the greatest coach, greatest player, second fiddle and greatest rebounder and defensive specialist in the history of NBA.

“Wisdom is always an overmatch for strength.”-Phil Jackson, NBA Coach

“Everything negative – pressure, challenges – are all an opportunity for me to rise.”-Kobe Bryant

“As far as carrying the torch for the years to come, I don’t know. I just want to be the best basketball player I can be.”-Kobe Bryant

“When it’s played the way is spooked to be played, basketball happens in the air; flying, floating, elevated above the floor, levitating the way oppressed peoples of this earth imagine themselves in their dreams.” -John Edgar Wideman

“Push yourself again and again. Don’t give an inch until the final buzzer sounds.”-Larry Bird

“A winner is someone who recognizes his God- given talents, works his tail off to develop them into skills, and uses these skills to accomplish his goals.”-Larry Bird

“Me shooting 40% at the foul line is just God’s way to say nobody’s perfect.”-Shaquille O’Neal

“Everything happens for a reason. I’m used to it, I prepare for it. Like I say, at the end of the day, those in charge of their own destiny are going to do what’s right for them and their family.”-Shaquille O’Neal

“Everybody on a championship team doesn’t get publicity, but everyone can say he’s a champion.”-Magic Johnson

“Don’t let what other people think decide who you are.”-Dennis Rodman

“We have a great bunch of outside shooters.  Unfortunately, all our games are played indoors.”  -Weldon Drew

“If you are afraid of failure you don’t deserve to be successful!”-Charles Barkley

“Basketball is like war in that offensive weapons are developed first, and it always takes a while for the defense to catch up.”   -Red Auerbach

“There may be people that have more talent than you, but there’s no excuse for anyone to work harder than you do.”
-Derek Jeter 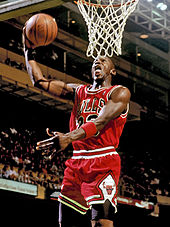 Michael Jordan is NBA greatest player of all time. The following are just some of the great sports quotes from “His Airness” a nicknamed bestowed by basketball fans all over the world.

“I can accept failure, everyone fails at something. But I can’t accept not trying.”

“I’ve always believed that if you put in the work, the results will come. I don’t do things half-heartedly. Because I know if I do, then I can expect half-hearted results.”

“I play to win, whether during practice or a real game. And I will not let anything get in the way of me and my competitive enthusiasm to win.”

“Just play. Have fun. Enjoy the game.” “When I step onto the court, I don’t have to think about anything. If I have a problem off the court, I find that after I play, my mind is clearer and I can come up with a better solution. It’s like therapy. It relaxes me and allows me to solve problems.”

“You can practice shooting eight hours a day, but if your technique is wrong, then all you become is very good at shooting the  wrong way. Get the fundamentals down and the level of everything you do will rise.”

“I would tell players to relax and never think about what’s at stake. Just think about the basketball game. If you start to think about who is going to win the championship, you’ve lost your focus.”

“When I step onto the court, I don’t have to think about anything. If I have a problem off the court, I find that after I play, my mind is clearer and I can come up with a better solution. It’s like therapy. It relaxes me and allows me to solve problems.”

“Obstacles don’t have to stop you. If you run into a wall, don’t turn around and give up. Figure out how to climb it, go through it, or work around it.”

“I have missed more than 9000 shots in my career. I have lost almost 300 games. On 26 occasions I have been entrusted to take the game winning shot…and missed. And I have failed over and over and over again in my life. And that is why… I succeed.”