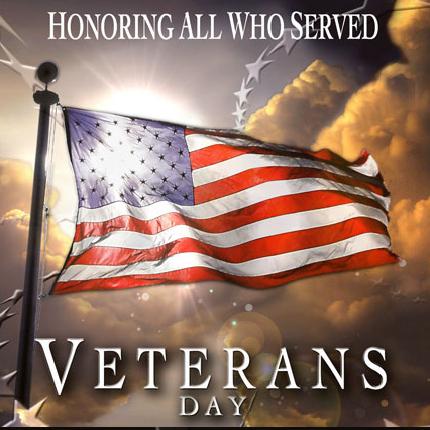 Let’s give thanks to our brave soldiers who struggled for us in order to achieve liberty and sovereignty. Read and enjoy these inspiring Veterans Day quotes and sayings of famous people. These quotes about Veterans Day are meant to commemorate our soldier’s braveness and selfless efforts. As the nation honor them we are also have to salute them for sacrificing their happiness and family life for our protection.S o send a veterans day Greetings to them and appreciate them for the work they have done for us Feel free to share these Veterans Day thank you quotes and sayings.

Collections of Quotes for Veterans Day

“Soldiers are men… most apt for all manner of services
and best able to support
and endure the infinite toils
and continual hazards of war.”
~ Henry Knyvett

“In the beginning of a change,
the patriot is a scarce man, and brave,
and hated and scorned. When his cause succeeds,
the timid join him, for then it costs nothing to be a patriot.”
~ Mark Twain

“The only war is the war you fought in.
Every veteran knows that.”
~ Allan Keller 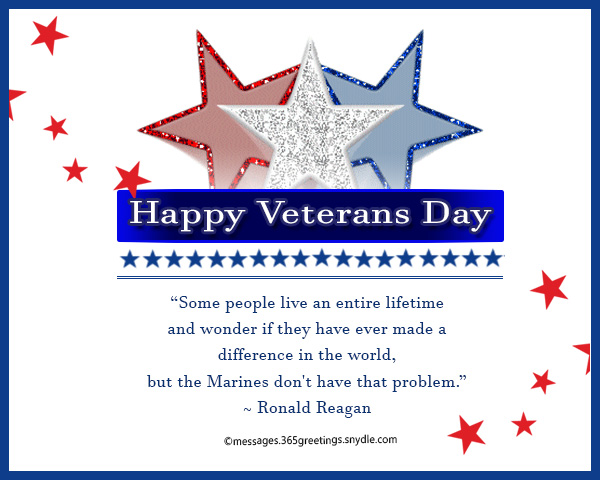 “Some people live an entire lifetime
and wonder if they have ever made a difference in the world,
but the Marines don’t have that problem.”
~ Ronald Reagan

“How important it is for us to recognize
and celebrate our heroes and she-roes!”
~ Maya Angelou 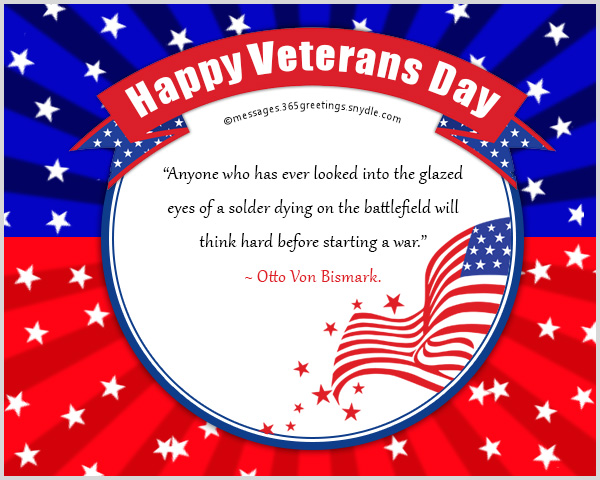 “Anyone who has ever looked into the glazed eyes of a solder dying on the battlefield will think hard before starting a war.”
~ Otto Von Bismark.

“What a cruel thing is war:
to separate and destroy families and friends,
and mar the purist joys and happiness God has granted us in this world.”
~ Gen. Robert E. Lee 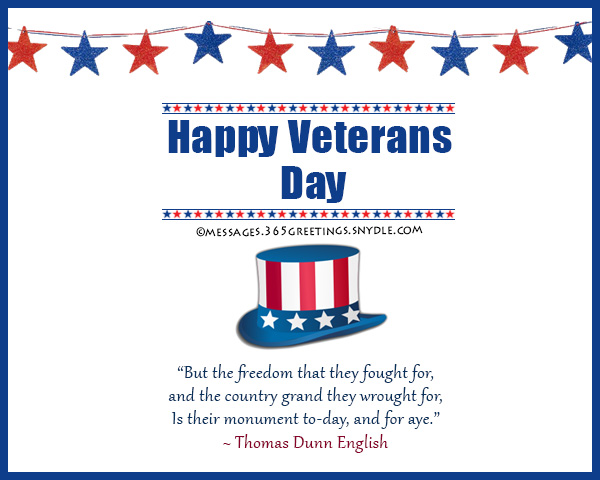 “But the freedom that they fought for,
and the country grand they wrought for,
Is their monument to-day, and for aye.”
~ Thomas Dunn English

“Because all of us believe and understand in the fabric of the common bond of why we call ourselves American is to care for the men and women who wear the uniform; and when they take off the uniform, we care for them when they are veterans.”
~ Steve Buyer

“A hero is someone who has given his or her life to something bigger than oneself.”
~ J. Campbell

“We, too, born to freedom, and believing in freedom, are willing to fight to maintain freedom. We, and all others who believe as deeply as we do, would rather die on our feet than live on our knees.”
~ T. Roosevelt

“As we express our gratitude, we must never forget that the highest appreciation is not to utter words, but to live by them.”
~ John Fitzgerald Kennedy

“This nation will remain the land of the free only so long as it is the home of the brave.”
~ Elmer Davis

“The willingness of America’s veterans to sacrifice for our country has earned them our lasting gratitude.”
~ Jeff Miller

“To be free and to have a choice and a voice means that veterans have been quieted through death.”
~ Byron Pulsifer 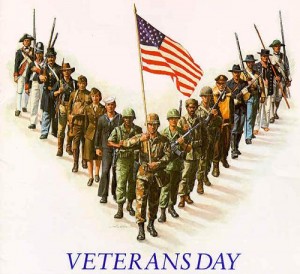 On this Veterans Day, spread the word. Let’s remember the efforts of our proud and strong Veterans for they bravely struggled to achieve our country’s liberty and freedom. Here are some happy veterans day greetings and veterans day messages that you can post and share to your profiles as facebook status on Veterans day. Feel free to share.

Unity is what we needed and that is what you have shown us.
Being the youth of today and the future leaders of this country,
we hope to live a more noble life just like all of you!
Happy Veterans Day!

An honorable act you did has gone a long way.
We are now enjoying a peaceful environment because of you.
Happy Veterans Day

Only a real hero can do what you did a long time ago.
I hope to be like you.
So noble and strong.

Happy Veterans Day to all the people who had shown so much love for our country. They willingly offered their life even if it meant giving up all their happiness.

For your unselfish efforts…
For serving our country selflessly…
We salute YOU!
Happy Veterans Day! 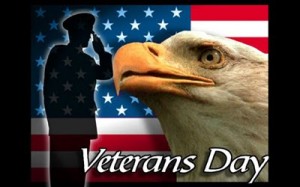 Show our appreciation to our brave soldiers who have done their best for our country’s liberty. Here are some popular Veterans Day quotes and inspiring Veterans Day sayings that you can contemplate and ponder on as we remember the special day meant to honor our strong Veterans. It is the time to say thank you by sending a thank you veteran quotes to them for all the work they have done for us. Share and spread these quotes about Veterans Day to your friends.

Anyone who has ever looked into the glazed eyes of a soldier dying on the battlefield will think hard before starting a war.
~ Mark Twain

Some people live an entire lifetime and wonder if they have ever made a difference in the world, but the Marines don’t have that problem.
~ Ronald Reagan

A soldier is he whose blood makes the glory of the general.
~ Henry G. Bohn

The number of medals on an officer’s breast varies in inverse proportion to the square of the distance of his duties from the front line.
~ Charles Edward Montague 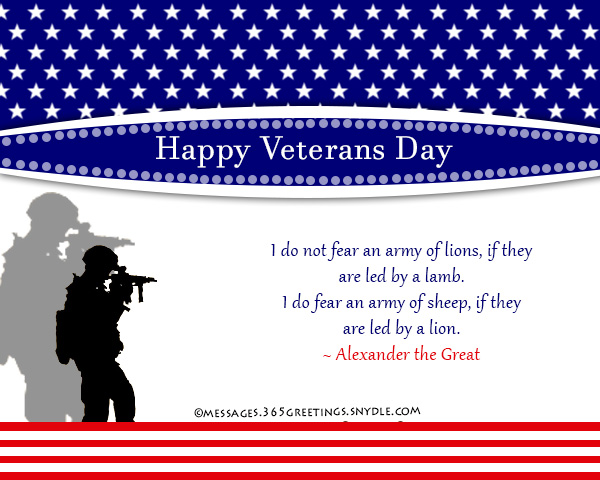 A brave captain is as a root, out of which, as branches, the courage of his soldiers doth spring.
~ Sir Philip Sydney

Nations customary measure the “cost of war” in dollars, lost production, or the number of soldiers killed or wounded. Rarely do military establishments attempt to measure the cost of war in terms of individual human suffering. Psychiatric breakdown remains one of the costly items of war.
~ Richard Gabriel, No More Heroes

This will remain the land of the free only so long as it is the home of the brave.
~ Elmer Davis 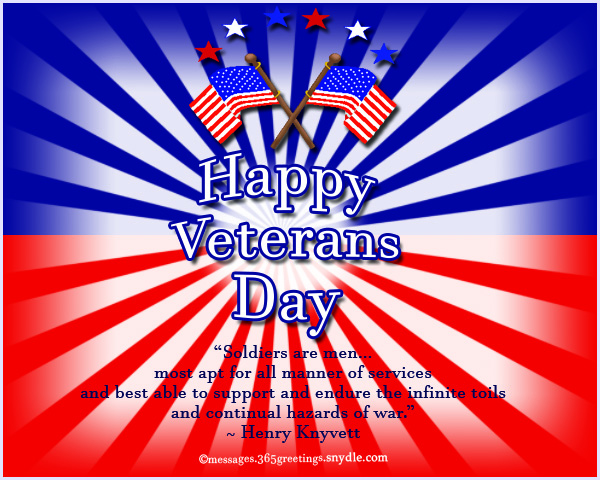 Once we have a war there is only one thing to do. It must be won. For defeat brings worse things than any that can ever happen in war.
~ Ernest Miller Hemmingway

We have met the enemy and they are ours!
~ Commodore Oliver Hazard Perry

We are not retreating — we are advancing in another direction.
~ General Douglas

As we express our gratitude, we must never forget that the highest appreciation is not to utter words, but to live by them.
~John Fitzgerald Kennedy

When eating bamboo sprouts, remember the man who planted them.
~ Chinese Proverb

How far that little candle throws his beams!
So shines a good deed in a naughty world.
~ William Shakespeare

The more we sweat in peace the less we bleed in war.
~ Vijaya Lakshmi Pandit

I think there is one higher office than president and I would call that patriot.
~ Gary Hart

In war, there are no unwounded soldiers.
~ José Narosky

It is easy to take liberty for granted, when you have never had it taken from you.
~ Anonymous