Take a look at our collection of goodbye quotes and sayings with images. There is definitely no good in saying goodbye. Be it for a while or forever saying farewell to anyone, either a family member or a colleague can be emotional with varying depths depending on circumstances but still, not without feeling.

Humans are creatures of community, we love and share our lives, creating bonds and building relationships over time sometimes without even realizing that we are.

Loosing someone who has been a part of our lives even if not permanently can take a deep toll on us, goodbye comes in varying forms and while some try to keep it casual to avoid the emotions involved, the last words we say to a person before they leave or depart from our lives are very important.

Those words should convey our love, encouragement, best wishes and the sincerity of our feelings and these quotes might just be what you need to say the proper goodbye.

Nothing lasts forever. Forever is a lie. All we have is what’s between hello and goodbye.

Saying goodbye doesn’t mean anything. It’s the time we spent together that matters, not how we left it.-Trey Parker

We started with a simple hello but ended with a complicated goodbye.

Goodbye is the hardest thing to say to someone who means the world to you, especially when goodbye isn’t what you want.

For every goodbye, God also provides a hello.-Donna Gable Hatch

I have to say goodbye to things in order to take on bigger things that I’ve always wanted to do.- Mahershala Ali

How lucky i am to have known someone who was so hard to say goodbye to.

Goodbye is the most painful way to solve a problem.

If you are brave enough to say goodbye, life will reward you with a new hello.

Let me make this easier than saying goodbye: let me tell you hello in advance for the next time i get to see you.

Sometimes you have to find the good in goodbye.

The saddest part in life is saying goodbye to someone you wish to spend your life with.

You will always be my favorite hello and goodbye.-Cecelia Ahern

It’s not the goodbye that hurts, but the flashbacks that follow.

The most painful goodbyes are the ones that are never said and never explained.

There’ll always be unforgettable memories behind your goodbyes.

We laughed until we had to cry, we loved right down to our last goodbye, we were the best.

Goodbye may seem forever. Farewell is like the end, but in my heart is the memory and there you will always be.

Say goodbye to golden yesterdays: or your heart will never learn to love the present.

Every goodbye makes the next hello closer.

I just want someone who will stay in my life. So i won’t have to worry about another goodbye.

It’s sad but sometimes moving on with the rest of your life starts with a goodbye.

A memory last forever, never does it die. True friends stay together and never say goodbye.

It takes a minute to say hello and forever to say goodbye.

Sometimes you have to hold your head up high, blink away the tears and learn to say goodbye. 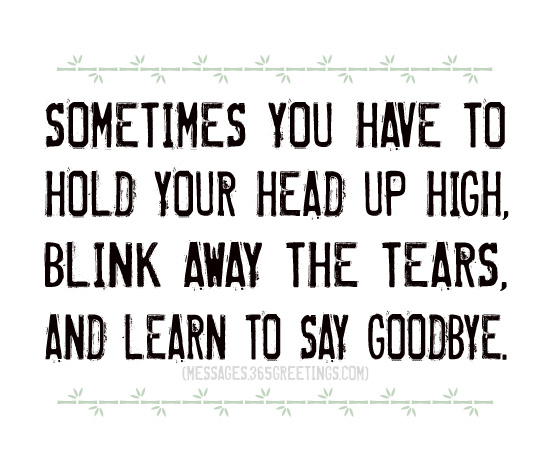 The story of life is quicker than the blink of an eye, the story of love is hello, goodbye.

Saying goodbye to the people you love isn’t easy.-Jodi Picoult

It’s hard to say goodbye to what you want forever.

Goodbye hurts, but not as much as the memories.

Don’t cry because it’s over. Smile because it happened.-Dr. Seuss

All the misery of the world is nothing next to a farewell.-Daniel Balavoine

I love you too much to say goodbye.-Lauren Kate

Sometimes i wish i never became so close to you, that way it wouldn’t be as hard saying goodbye. 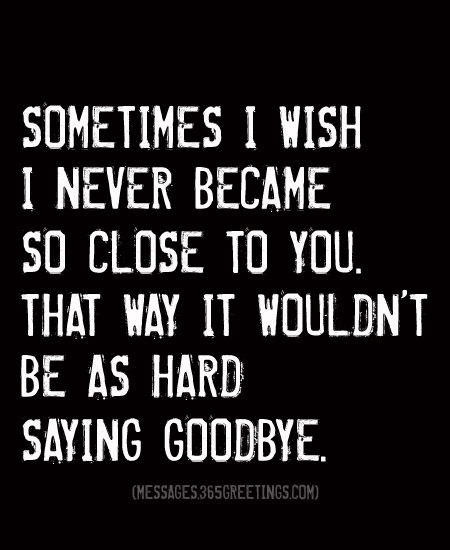 As you walk away from my life, i hope you get what you’re looking for in life. Goodbye.

Goodbye hurt when the story is not finished and the book has been closed.

Saying goodbye hurts, but knowing it is goodbye kills.-Joel Kennedy

You never leave someone behind, you take a part of them with you and leave a part of yourself behind.

Love is pure and true when the hurt is much deeper during farewells.

When i had to say goodbye to you, my love, it was like saying goodbye to my life.

It hurts to say goodbye to the person you love most.

Sometimes goodbye is the only way.

We only part to meet again.

Do you know what your problem is? You can’t live with the idea that someone might leave.-John Green

They who go feel not the pain of parting; it is they who stay behind that suffer.-Henry Wadsworth
Longfellow

Saying Goodbye Quotes to Someone You Love